Luckily, I didn’t need to rack my brains too hard for something amazing, because I came across something that fits the description just two days ago.

On Sunday myself, Mr IT, ArtyDaughter, ConstructoBoy and my Mum celebrated Mother’s Day with a trip to The Shell Grotto in Margate, Kent. It’s been on TV a few times and you may have seen it on George Clarke’s Amazing Spaces programme. It was featured in the 2012 Christmas Special which you can watch here on the Channel 4 website. So why does it qualify as Amazing?

Firstly, there’s the sheer scale of the achievement. The Grotto is 104ft long with a rotunda, a dome and a passage leading to a room nicknamed the altar chamber (sadly a WW2 bomb partially destroyed this area). As for the time it must have taken; wow. Every surface apart from the floor is covered with a variety of shells in intricate patterns, and there are a staggering 4.6 million shells remaining in situ, although some have become detached over time or have been stolen by souvenir hunters. The floor, which may have been decorated too and/or made of marble, has been removed at some stage and this has damaged the bottom of the walls.

Some sections have also been renovated over the years, though when and to what extent is unknown – which leads us to the second ‘Amazing’ qualification.

Nobody knows when, why or how the Grotto was constructed, or who by. Notice I don’t say ‘nobody knows for definite’, because researchers aren’t even anywhere near a definitive answer; the evidence is too scarce. There are a number of hypotheses, but the one that seems most likely is the one that’s probably hardest to prove.

The Grotto is Grade 1 listed and has been open to the public since 1838; restorations done before its opening and for many years after were poorly recorded or not noted at all. It was supposedly discovered in 1835, although even that date – and the circumstances of its discovery – aren’t rock solid. Was the Grotto discovered when house foundations were being dug? Was a small boy sent down the hole to investigate?

Before 1838 there are no recorded mentions, documents or maps relating to the Grotto. An 1821 map of Margate shows that the area above the Grotto as an open field, but not far from building expansion. Had people have been constructing something on this scale around this time (not to mention importing millions of diverse shells), surely someone would have noticed. It would have taken months, if not years, of work.

Was it built by the Knights Templar? Did a local aristocrat order it built? In a field they didn’t own, telling nobody and leaving no documentation behind? Did someone go to such extreme lengths to build it merely as a Victorian tourist attraction – and not bother to generate any publicity about it during construction? And if it had been recently constructed when it was (re)discovered, why did the people responsible not come forward and take the credit for a remarkable achievement? The iconography of the Grotto is also completely incompatible with Victorian follies and continental shell grottoes of the period.

After our visit – which filled my head with many more questions than answers! – I picked up a copy of ‘The Enigma of the Margate Shell Grotto’ in the gift shop. Published in 2011 by  Martyrs Field Publications, this is the most recent examination of the evidence. Patricia Jane Marsh discusses each of the Grotto construction theories, analysing them against a specific set of criteria. She makes no judgements herself, but her analysis does point to the Phoenicians as the most likely builders. The Phoenician Goddess Tanit may have given the Isle of Thanet its name, and the Phoenician God of the Underworld, Melqart, may have given Margate its name.

Patricia is a historian and linguist. Her discussion is enlightening and rigorous but also an accessible, fascinating read and I highly recommend it if you want to find out more. You can buy it directly from the publisher here. 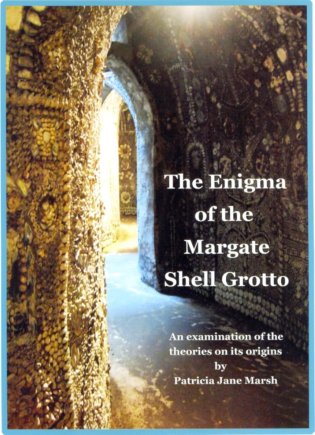